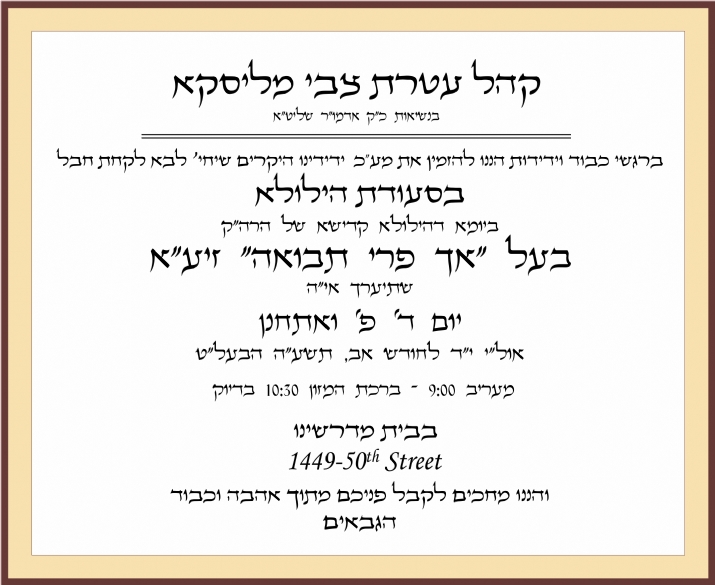 Yartzeit of Rav Tzvi Hersh of Liska to be observed 14 AV throughout the World.

On Wednesday evening, Parshas V'eschanon, the night preceding 14 AV the the current Liska Rebbe, HaRav Tzvi Hersh Friedlander SHLITA,  will commemorate the 142th yartzeit of Rav Tzvi Hersh of Liska who was known throughout Hungary as the Ach Pri Tevuah, the tile of his sefer on Torah.

In virtue of his status as the preeminent Chasidic manhig in Hungary of his generation Rav Tzvi Hersh of Liska’s influence was felt throughout his lifetime and for generations. As a result of his inspiring leadership Chasidus flourished in all regions of Hungary.

His Yartzeit along with the Yartzeits of the Reb Eizek of Kaliv and the Yismach Moshe of Uhel were the three yartzeits that attracted tens of thousands of participants in pre-war Hungary and where miraculous yeshous were recorded on those holy days.

This year as every year, the Yartzeit of Rav Tzvi Hersh of Liska will be observed by Chasidim all over the world including Yerushalim, Bnei Brak, London, Antwerp, as well as in the United States in every Chasidisha community.

Most noticeable is the reverence of Rav Tzvi Hersh of Liska in Satmar communities. It is told by Reb Ezriel Glick, longtime Gabbi of the late Satmar Rebbi, Rav Yoel Teitelbaum of sainted memory that he would only proceed to the blowing of the shofar on Rosh Hashanah each year without exception after he would remark to those surrounding him that “indeed it is true that Rav Tzvi Hersh of Liska was a tzadik and would quote a dvar torah from him. Also not known but the Satmar Rebbe gave a unique bracha to the current Liska Rebbe, Rav Tzvi Hersh Friedlander Shlita that “he should be zocha “Lehachzer Ateres Le’yoshna” alluding to his exalted ancestry.

Indeed, the focal Yartzeit Seudah will be taking place Wednesday evening, preceding 14 Av/July 29 at the Liska Bais Hamedrash, located at 1449 50th Street, in the Boro Park section of Brooklyn commencing at 9:15pm with Maariv followed immediately with the Yartzeit Seudah which will be led by the current Liska Rebbe, Rav Tzvi Hersh Friedlander Shlita and attended by prominent descendants of the Ach Pri Tevuah, Rabonim and all those who feel a special connection to Rav Tzvi Hersh of Liska and revere his legacy.

As is his custom the Liska Rebbe sends a shaliach to Liska for the yartzeit--this year his nephew Rabbi Yisroel Friedlander son of the Hivnover Rav will be traveling and taking along all the kvitlich received by the Liska Rebbe. 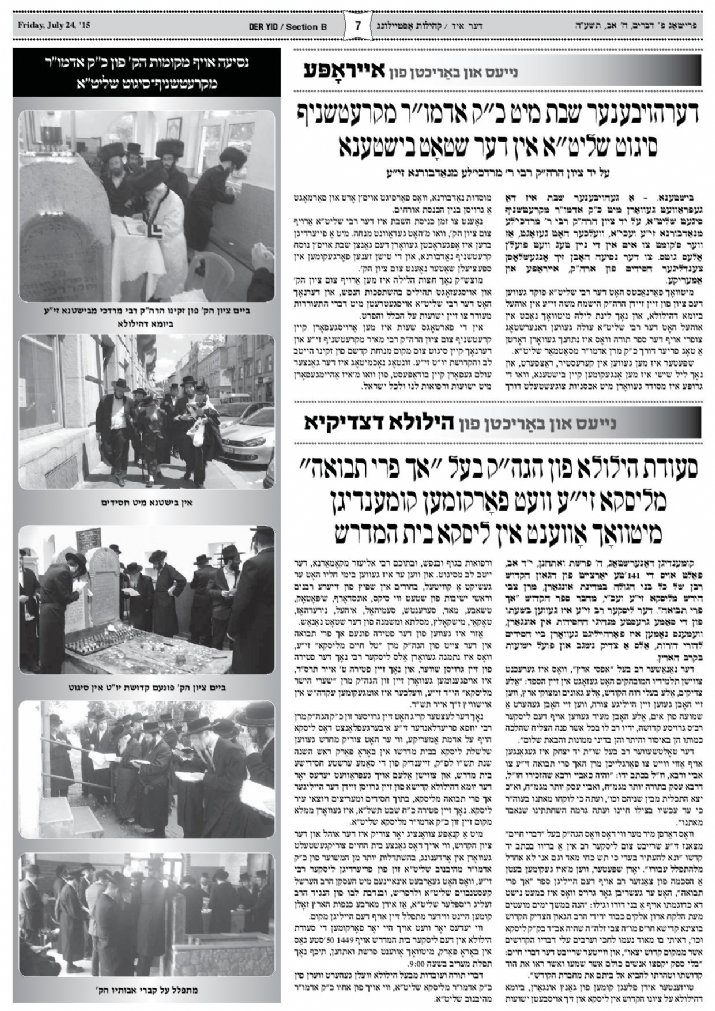 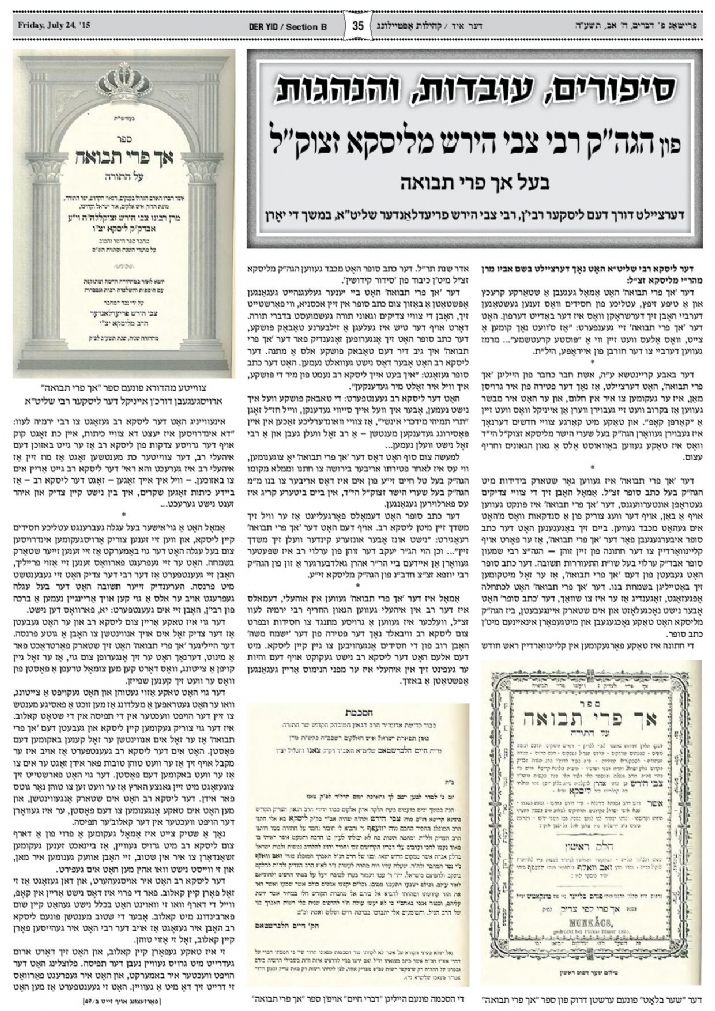 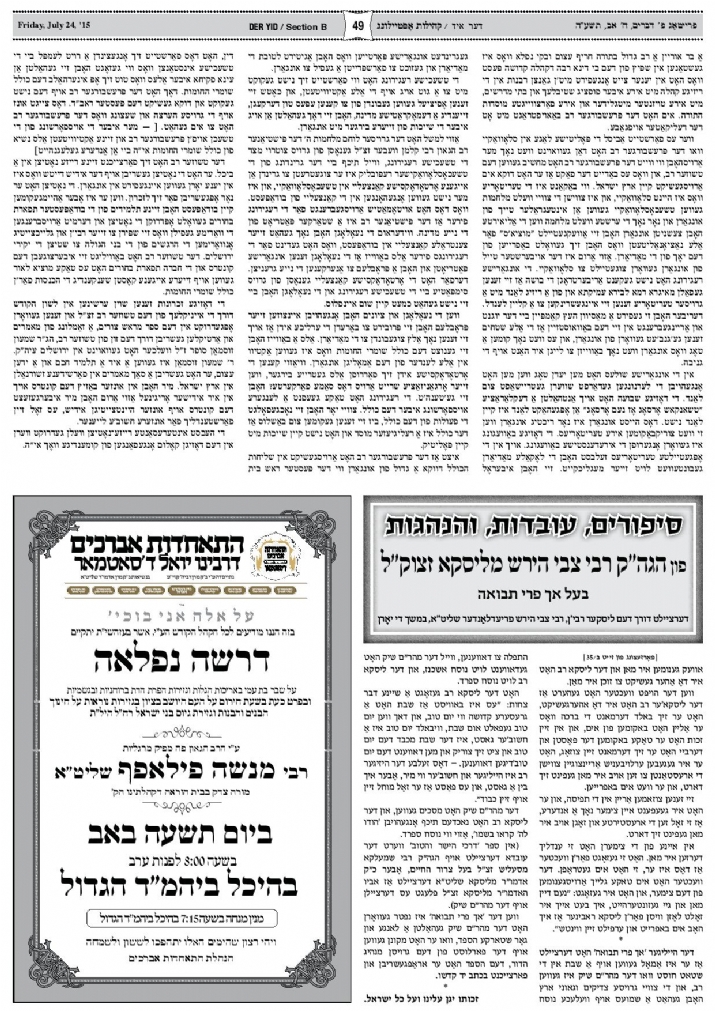 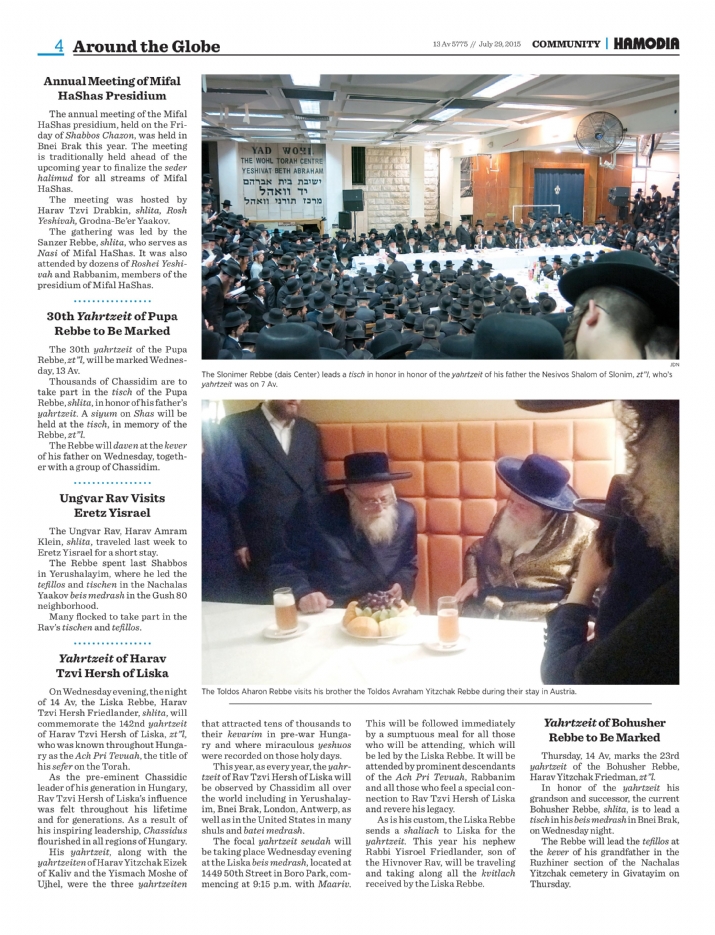 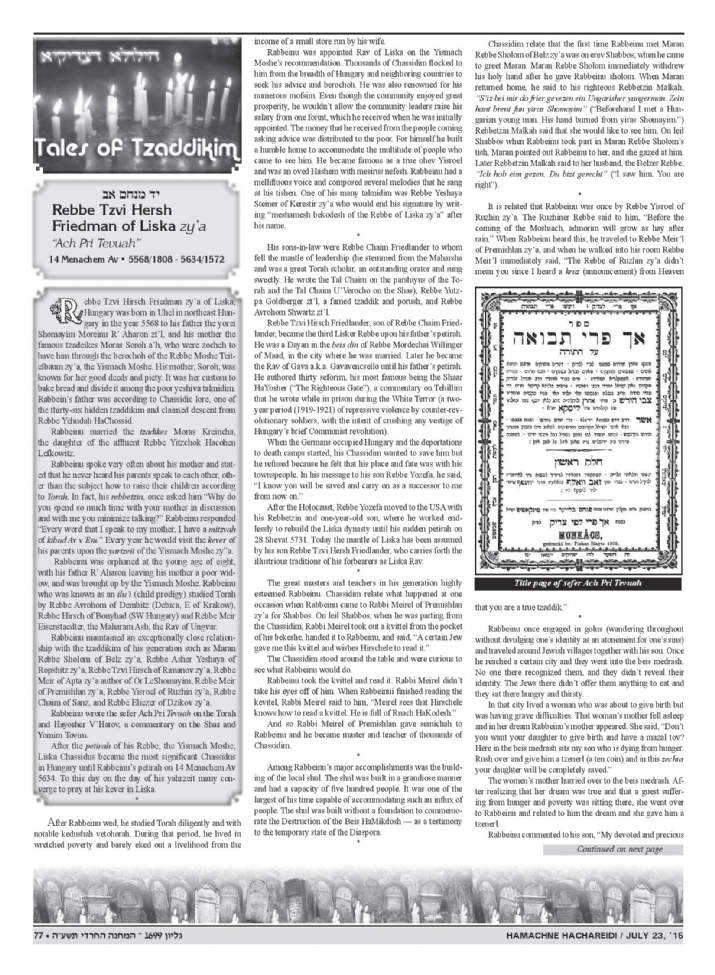 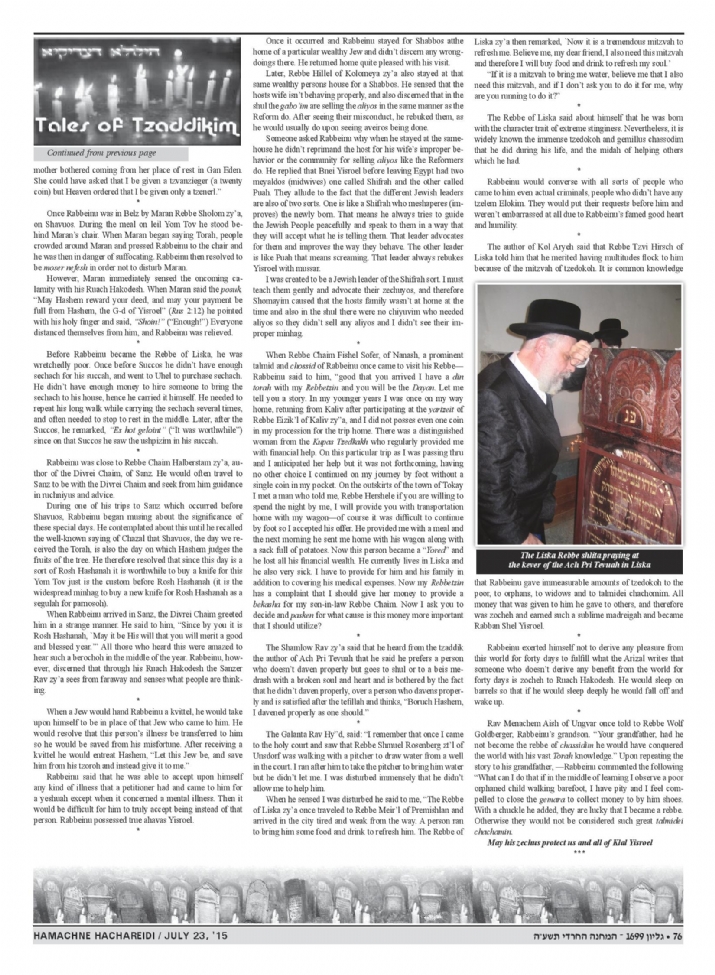 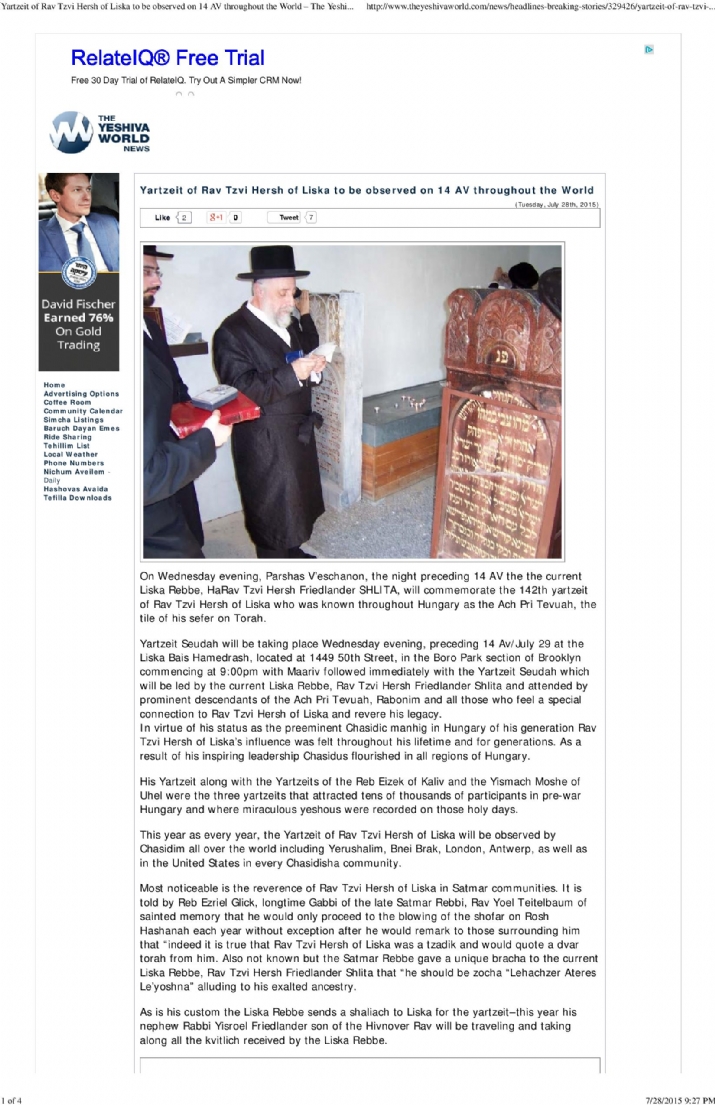