9 Iyar marks the 104th yahrtzeit of the second Rebbe of the Liska dynasty, Harav Chaim Friedlander, more commonly known by the name of one of his sefarim, the Tal Chaim.

Liska is nestled among the hills of the Tokay country side (3 hours from Budapest), where the famous Tokay wines come from. It had a population of around 2,682 inhabitants. Liska is also the birthplace of one of the most illustrious Chassidic lineages.

Beginnings of Chassidus in Liska

There are no exact dates given as to when Yidden decided to settle in Liska. However, it is known that an influx of Yidden came in about 1830-1840, with the advent of the young Reb Tzvi Hersh Friedman of Liska. There is no question that the driving force behind the growth of the Jewish population was Reb Tzvi Hersh, father-in-law of the Tal Chaim, who, with his great knowledge, human understanding, and wisdom, attracted the vintners (wine merchants) from Poland and Russia, who came for the purpose of buying wine, and subsequently settled in Liska to be near their Rebbe. The original founding fathers of the town were mainly occupied with the selling, trading, and buying of the famous Tokay wine.

The Jewish population grew considerably, along with the brisk and successful wine trade. Religious life was at its peak, led by the Rebbe, who, at an early age, was known as a great talmid chacham and tzaddik.

In a short time, the town of Liska became the focal point of Chassidus and its Rebbe was named the father of the Chassidic movement in Hungary. Both in his youth and later as a Rebbe of thousands of Chassidim, Reb Tzvi Hersh traveled to other great Rebbes of his time, such as Harav Yisrael of Ruzhin, Harav Meir of Premishlan, Harav Shalom of Belz, Harav Tzvi Hersh of Rimanov and others. However, it was his Rebbe, the Yismach Moshe of Uhel,that played a dominant role in shaping his life and thoughts. It was he who appointed Reb Tzvi Hersh as Rav in Liska, Hungary.

As a result, thousands of Chassidim converged on Liska, eager to bask in the warmth of the Rebbe's benevolence. The Liska Rebbe was acknowledged as an eminent talmid chacham and a halachic posek. He wrote the sefarim Ach Pri Tevuah and Hayashar Vehatov.

In the sefer Ach Pri Tevuah the Sanzer Rav writes: “In these past days, when the Aron Elokim was taken from us…” The Sanzer Rav continues: “Whoever merited to bask in his holiness and glory…” Such was the esteem that the Sanzer Rav had for his friend, the Liska Rav.

Harav Chaim Friedlander, the Tal Chaim, was born in 5600/1840, in the town of Klienverdan in Hungary. He was a sixth generation descendant of the Maharsha (the Divrei Chaim of Sanz was able to trace his direct lineage), the Maharal of Prague; the Taz; Bach; Shelah Hakadosh; the Smichas Chachamim, and others.

He married the third daughter of the first Liska Rebbe, Harav Tzvi Hersh, the Ba’al Ach Pri Tevuah; but after having three children together, his wife passed away. The Ach Pri Tevuah, who was very close with his son-in-law, wanted the Tal Chaim to stay in the family and declared that he would not find a wife outside of the family, and indeed, so it was. Some time later, the Tal Chaim became engaged to his 12-year-old niece. They were married three years later.

After his marriage, the Tal Chaim was Rav in Erdobenye; thereafter, he was Dayan in the town of Liska, working alongside his father-in-law. His connection with his father-in-law was legendary When the Ach Pri Tevuah was niftar on 14 Av 5634/1874, the Tal Chaim inherited the mantle of leadership, becoming Rebbe, at the age of 34.

The Tal Chaim was best known for unswerving dedication to Torah learning, submerging his feet in cold water to keep himself awake and forgetting to eat for days at a time. “His whole life was Torah,” says his great-grandson, the current Liska Rebbe, Harav Tzvi Hersh Friedlander, shlita. “He looked at everything, including current events, with the perspective of Torah.”

His mind was so immersed in Torah learning that he did not know the value of money, and would need someone to safeguard his funds, so that he would not bestow the money he had been given carelessly. In fact, once when a person wanted to give him a pidyon, he extended a blue coin (of a lesser denomination), then realized his mistake and corrected himself, extending a red coin (of a higher denomination). The Tal Chaim enquired why the chassid chose to give him the red coin instead of the blue one. The person replied that the red one was more valuable. The Tal Chaim responded by saying that “he did not understand the government. After all, red symbolizes midas hadin, and blue, midas harachamim!”

The Tal Chaim’s hasmadah in Torah learning was legendary; every second was dedicated to the amkus of being mechadesh chiddushei Torah, coupled by extreme humility, to the point of limiting his accessibility.

The Tal Chaim was very famous among the Rabbanim and tzaddikim of the generation. His sefarim contain 17 haskamos from the tzaddikim of that generation, including the Rebbes of Shineve, Vizhnitz, Munkatch, Bruzhan, Tolshove, Borgenfreund, Dezh, Chust, Ma’ad, Satmar, Vi’atzen, Selish, Brodi, Bonihad, Harav Avraham Binyamin Kluger, son of Harav Shlomo Kluger, and more. Indeed the Tolsheve Rav called him a Gaon HaGaonim. Harav Yaakov Moshe of Kamarna declared, “I heard of the Tal Chaim’s greatness in Kabbalah from my father, Harav Eliezer Tzvi of Kamorna. However, I did not know of his greatness in Toras Hanigleh until now.”

The Arugas Haboisem, Rav Moshe Greenwald, wrote in his haskamah on Tal Chaim, “I, too, was zocheh to know him,” considering this a zechus to have had a relationship with the Tal Chaim.

Rav Mordechai Winkler of Mad, author of Levushei Mordechai, who was regarded as one of the Torah giants of Hungary, writes of Reb Chaim in his haskamah, “tzaddik yesod olam,” recalling his Torah discourses with the Tal Chaim. In his words, “I was stunned by the deepness of his holy words, highlighting his depth and vast knowledge in Torah.”

The previous Mattersdorfer Rav, Rav Shmuel Ehrenfeld, once recalled that his father, Rav Simcha Bunim Ehrenfeld, the Mattersdorfer Rav, used to quote in his daily shiurim from the sefer Tal Chaim U’Brachah and that he regularly sent his talmidim to the Tal Chaim. His respect for the Tal Chaim was so intense that he once escorted him, together with all his talmidim, to the edge of town, upon the conclusion of a visit.

Rav Menachem Mendel of Vizhnitz, the Tzemach Tzaddik, used to visit the Tal Chaim when he traveled to Hungary, and his grandson the Ahavas Yisrael of Vizhnitz wrote a warm haskamah on the Tal Chaim, writing “that although I personally did not know the Liska Rav, but my grandfather held him in high esteem.”

The Komarna Rebbe, Reb Eliezer Tzvi Safrin, the son of Harav Eizikel Komarna, who used to travel to Reb Tzvi Hersh of Liska, continued to visit Liska, to spend a Shabbos with the Tal Chaim. In fact, one year during his stay in Liska, he felt a depressing feeling when he suddenly realized that he had not gone to the Ach Pri Tevuah’s tziyun. Reb Yisroel Frankfurter, a prominent Komarna chassid, writes in his memoirs that he was present when the Tal Chaim once spent a Shabbos in the presence of Reb Eliezer Tzvi of Komarna.

Rav Tzvi Hersh of Liska, the Tal Chaim’s son and successor, once recalled that the Belzer Rav, Harav Yehoshua, to whom the Tal Chaim traveled upon the petirah of his father-in-law, secluded himself in private with his father for many hours, discussing the intricacies of Toras haKabbalah.

When the Tal Chaim was pressed to reveal the contents of his discussion with the Belzer Rav, he replied that, “This is precisely why the Belzer Rav is talking with me — he knows that it will remain confidential.” In later years, he and his successor Rav Tzvi Hersh confirmed that the Belzer Rav had wanted to discuss with his father certain Toras hanistar. In fact, the Belzer Rav once referred to the Tal Chaim as “the Hungarian Lamed Vav.” Once, during a tisch, he took the Tal Chaim’s plate and mixed the contents with those of his own plate, mixing the two portions and then distributing shirayim, which was very symbolic of his deep respect for him.

The Tal Chaim’s chiddushim on sugyos Hashas were recorded on paper only at the insistence of his father-in-law, who inquired if he was doing so, and, upon discovering that he was not, instructed him to begin doing so. Upon being presented with the text, he reviewed it and kissed it.

In 5604/1904, the political climate in Hungary drastically declined, and a decree was issued against the Jews, demanding that they give up their property and other decrees.

The Tal Chaim was seen going to the Liska beis medrash and davening intensely there, prepared to sacrifice himself in order that the decree be nullified. One week later, on 9 Iyar, at the age of 64, the Tal Chaim choked while eating a portion of fish, and the decree was, in fact, abolished. His self sacrifice as a korban tzibbur was accepted.

At his levayah, one of his hespadim was delivered by Rav Avraham Yitzchak Glick, the Rov of Tolshava, the Ba’al Yad Yitzchak, who remarked, and in essence summed up the life and ideals of the Tal Chaim by declaring, “Some can consider the Liska Rav a batlan; I say we are batlanim, for he was able to be mater an agunah with a Tosafos.”

His family wanted to bury him in the ohel of his father-in-law, but the space was not large enough. The Tal Chaim’s son, Rav Tzvi Hersh Friedlander, the Ba’al Shaarei Hayosher, decided that, at the very least, they would extend the roof, so that they could bury his father underneath it. He came to the Ohel with a minyan of ten Rabbanim to ask forgiveness of the Ach Pri Tevuah for not burying his beloved son-in-law near him. The next day, a miracle happened. The walls of the ohel had shifted, and there was just enough room for the Tal Chaim to be buried near the Ach Pri Tevuah, where his kever still rests today.

His son, the Shaarei Hayosher, assumed his place in Liska and wrote over thirty seforim, only one (Shaarei Hayosher on sefer Tehillim) of which has survived. He and most of his family perished in the Holocaust. His son, Rav Yosef Friedlander, mechaber of Tzvi V’Chammid, resurrected and re-established the Liska court in Boro Park, Brooklyn.

Upon his passing in 5731/1971, his son, the current Liska Rebbe, Rav Tzvi Hersh Friedlander, shlita, the baal Chamudei Tzvi, was named his successor and continues the illustrious chain of Liska Rabbanus, following in the footsteps of his exalted ancestry. 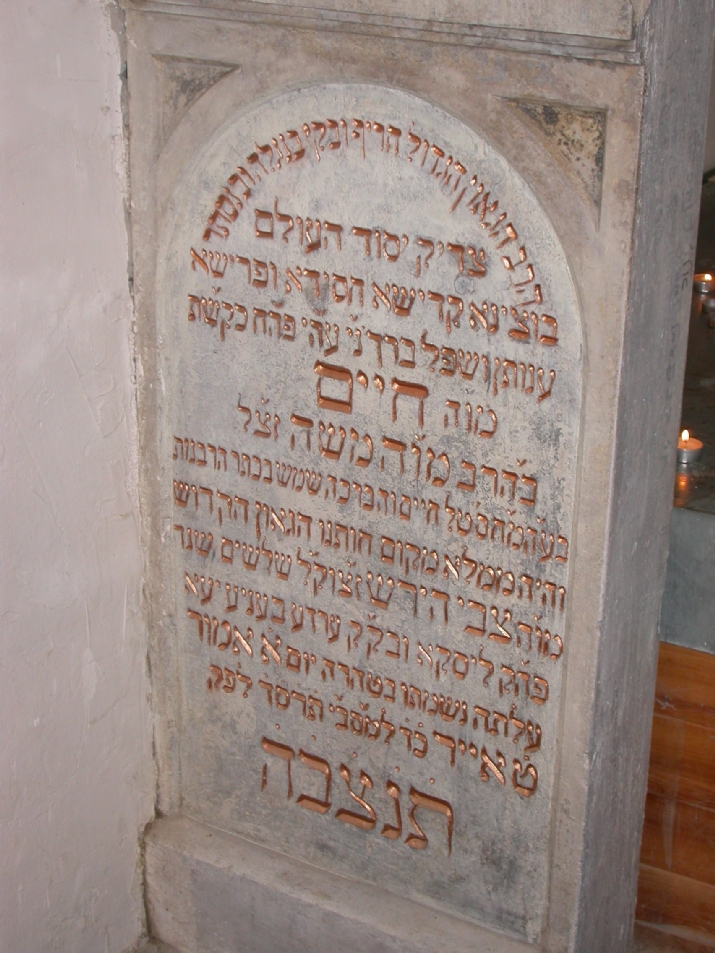 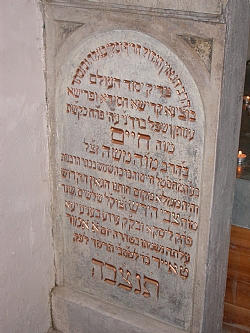 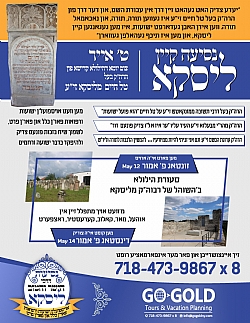 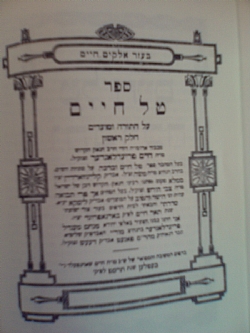 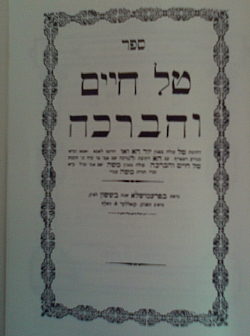